Manisha was hard done by a final round 21, to finish with a score of 113 in qualifying, which got her into a three-way shoot-off for the last two finals spots. She had scores of 23 out of 25 in each of the four preceding rounds and was in second place going into that fifth round.

She missed her first shoot-off shot, ensuring her Spanish and Polish rivals were then just fighting for bib numbers.

Top six shooters qualify for the 60-shots final round.

Kirti Gupta and Rajeshwari Kumari finished 17thand 18thin Women’s Trap respectively and the trio can still make amends in the Team competition where they are presently ranked third with a combined score of 314.

In the Men’s Trap, Prithviraj Tondaiman finished 26thwith a score of 112. Lakshay Sheoran shot 110 for a 34thplace finish while Kynan Chenai was two behind in 36thplace. He shot 109.

The first-ever National Para Shooting Championship 2020-21 for Rifle/Pistol events was inaugurated at the Manav Rachna Shooting Range, in Faridabad on Monday.

Around 200 shooters from across the country are participating in the competition organised by Sports Technical Committee, Para Shooting under the aegis of the Paralympic Committee of India (PCI) from March 1 to 5, 2021.

Sushil Kumar, India’s most decorated wrestler who has won consecutive Olympic medals, was the Chief Guest for the day who also fired the inaugural shot at the 10-meter shooting range at Manav Rachna Shooting Academy.

“We are very delighted and thankful to Manav Rachna for hosting the first ever National Para Shooting Championship. Such championships highlight the fact that Para Sports are also the mainstream sports and this National Championship will send this message to everyone in the country,” said Malik.

Congratulating the players, Dr. Bhalla shared, “We wish to create a sports ecosystem for everyone to play, and represent the country in different sports.”

Owing to its world-class Olympic-level shooting infrastructure, Manav Rachna has been chosen to host this prestigious championship: Nine Olympians are currently training/studying with Manav Rachna, 7000+ budding shooters are training across 13 shooting ranges, Shotgun shooting range for Trap, Double Trap, Sporting and Skeel, and country’s only Perazzi lounge housed within the Shooting Range.

National Rifle Association of India (NRAI) President Raninder Singh on Monday announced, that he would be persuading the General Body of the National Federation, scheduled to meet on March 5, 2021, to stay the recent decision taken by the Governing Body, to ban certain Shooters from the next Nationals for disciplinary reasons.

Invoking powers vested on him as President, Singh said, “It has always been our endeavor to act in the best interests of our Sport and our Shooters. As such, no one is as pained as us when at times severe action is needed to be taken on anyone belonging to the Shooting fraternity, most of all, on our dear Shooters. I received several requests from the parents and the affected Shooters themselves on the recent decision taken by the Governing Body.”

“As such I have decided to refer the decision to the General Body, scheduled to meet early next month, and persuade them to not implement the said decision. However, this will certainly be a one-off, and any such disciplinary breach, will not be tolerated in the future.”

In a meeting held last week, the Governing Body of the NRAI had banned the following Shooters from taking part in the next Nationals, for breach of discipline.

Gaurav had earlier won the bronze medal in 10m ARM shooting event at the Khelo Masters Games 2019-2020 in Ghaziabad.

Excited about the event, Gaurav said, “After lockdown this is my first event. I am really happy with it. I want to give my best. My coach Falaq Sher Alam is guiding me well.”

Gaurav will take part in the Double trap event this year. Gaurav, who took up powerlifting at the age of 17, is a giant of the sport. He had won two gold medals at the European Championships in 2019.

“For any athlete it is an honour to represent India and when the tricolour goes high, you can’t express that feeling,” Gaurav said.

Initially starting out as a weightlifter, Gaurav later switched to powerlifting under the guidance of Dronacharya awardee coach Bhupender Dhawan. But now he has switched to shooting. “Shooting is something that helps me keep calm. I will try to participate in more shooting competitions now,” he added.

//
DLP Correspondent in New Delhi
/
0 Comment
Abhinav Bindra, who is India’s first individual Olympic Gold Medallist, said that even before he had shot his first competition shot in... Read More 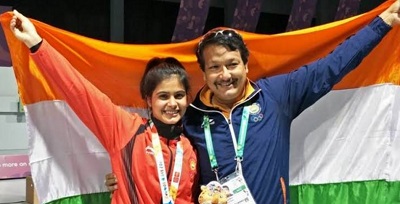 //
S.Kannan in New Delhi
/
0 Comment
Jaspal Rana is not known for displaying his emotions in public. He prefers to do his work quietly, be it the time... Read More

//
S.Kannan in New Delhi
/
0 Comment
August 11 is a very special day in Indian sport. In 2008, it was on this day Abhinav Bindra fired gold with... Read More